This case study relates to a fatal incident which took place at an indoor velodrome, where TRL’s investigation covered multiple technical areas including grip testing, environmental testing for dirt and debris, CCTV analysis and accident reconstruction.

An indoor, timber-surfaced velodrome had been hired by an amateur cycle club for peloton training.  During the session, the lead rider slid sideways from one of the high banked curves and collided with several other riders, one of whom sustained injuries that proved fatal.

Although there were CCTV camera images available, which showed the riders travelling relatively slowly, the footage was not detailed enough to show why the lead rider had lost control.

The Expert Witness and Investigations Team at TRL were instructed to investigate the physical factors that could have been causative of the loss of control.

It was noted that the bicycle ridden by the lead rider was fitted with blue coloured tyres; these had previously been banned on timber-surfaced venues. All of the other riders were using bicycles hired at the venue, which had plain black coloured tyres.

TRL carried out a physical inspection of the venue and conducted trial tests of the grip available to a representative bicycle tyre, using a modified Micro GripTester on a section of the track. 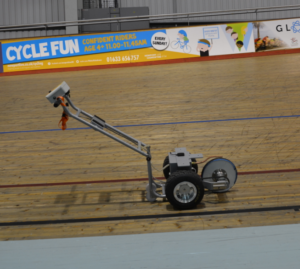 The GripTester measures the ratio of the horizontal and vertical forces, defined as the Grip Number (GN), acting on the test wheel axle when the tread is slipping at 10% relative to the speed of the unit at every 2.5 cm. That slip ratio is generally acknowledged to represent the peak value of grip of a tyre on a dry road surface.

Further physical tests were conducted in our materials testing facility on an exemplar timber runway, using tread samples from blue tyres along with multiple other cycle tread types, taken from road and racing tyres. 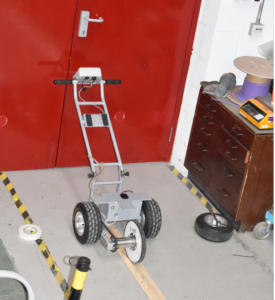 Analysis of the measured data showed that the mean GN of the blue-coloured tyres (numbers 7 & 12 on the graph) were significantly lower than that of other tyre types. Other dual compound tyres did not exhibit that lower level of grip. A significantly lower GN would have increased the probability of this bicycle sliding down the highly banked curve when travelling relatively slowly, as shown by the CCTV images. 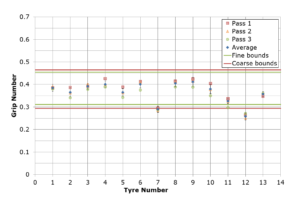 Another technical factor investigated by TRL was whether the timber surface was contaminated at the time of the incident. The cleanliness of a track of this type is critical to the grip of a tyre on a timber surface, and regular sweeping is a necessity. However, no technical assessment, measurements or observations of the track’s cleanliness had been carried out at the time of the incident.

The clothing worn by the lead rider as they slid down the banking was still available and had been stored in a plastic bag. In collaboration with environmental testing specialists at TRL, a vacuum sampling cannister was constructed incorporating a very fine, calibrated filter medium.

Small defined areas of the outer clothing were vacuumed through the calibrated filter. Some areas were close to where the clothing had melted during the rider’s descent along the timber slope, and these were compared to equivalent areas on the opposite side of the clothing which had likely not been in contact with the timber.

The investigation of the physical factors in this fatal event lay outside the general range of traffic accident reconstruction. TRL’s ability to call upon the expertise of a wide range of technical experts, along with our scientific capabilities, meant that we were able to fully investigate this unusual incident with a high level of technical competence.