December 15, 2020EDR / Black Box Downloads, Expert Witness, Vehicle safety
eCall is a vehicle system which automatically alerts emergency services in the event of a serious road collision. Using cellular phone networks, the location and time of the collision are sent directly to an emergency call centre, from where the information is passed on to rescue services.

According to estimates published by the European Commission[1], eCall can halve emergency response times and reduce the number of fatalities and severe injuries by up to 4% and 6%, respectively. As of April 2018, it is mandatory for new vehicles sold in the EU to have eCall fitted.

Many aspects of this data collection, ownership and distribution are the subject of debate, and TRL’s 2017 report for the EC ‘Access to In-vehicle Data and Resources’[2] assessed some of the legal and technical issues involved. Not all manufacturers are keen to release the data that they obtain from eCall, though new regulations are increasing pressure to do so.

For example, eCall standards such as BS EN 15722 specify the minimum data that must be transmitted by an equipped vehicle. Of interest to a collision investigator is that it is explicitly forbidden to use the data to show vehicle speed, although vehicle direction is required to be given.

Beyond the eCall minimum data, specifications also exist for ‘extended data’, which can be used to provide additional services to drivers such as traffic flow and road maintenance warnings. The graphic below illustrates the wider potential uses for this: 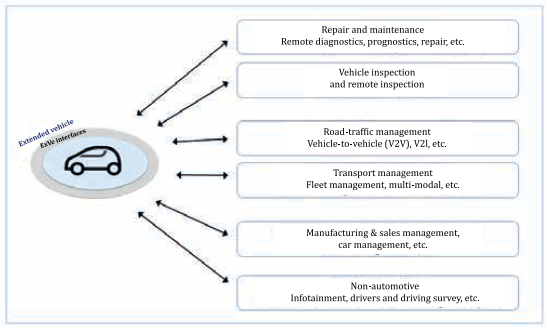 TRL are actively involved in the development and implementation of eCall and recognise its potential for further improving road safety, by providing data which is of use in collision research and investigations. Beyond eCall, we are also promoting awareness of the significant amount of data that vehicles record before and during a collision which is of value to investigation teams. It is our opinion that such teams should have access to this broad range of data and further regulation is required to facilitate this.

You can get in touch with us around eCall and the other forms of data collection in vehicles, here.