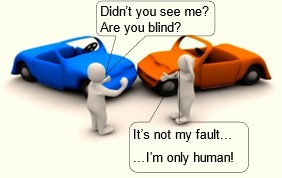 It is easy to forget sometimes with the advances in evolution and technology that we are all still animals! That is perhaps our weakest facet when driving or using the roads.  Another weakness is that, when we drive, most of the time we are moving beyond our ‘design speed’. Yes, drivers have literally overtaken evolution.

As innate as it is to be human and to go about our daily lives without considering how we function, it is when things go wrong, particularly in road collisions, that our design weaknesses come to the fore and we realise just how out of our comfort zone driving takes us.

Vehicle travel is on the whole comfortable, quiet and designed to limit fatigue; to the point that we are not generally aware just how fast we are travelling and how ill-adapted to it we are.

This is where the collision investigator should start to consider underlying reasons for our failings when it goes wrong.  It is important to remember that this is not to find excuses, but to identify possible reasons for the Courts and other fora to consider, in their judgements.

Everything, including our sight function, physiology (when it goes wrong), and cognitive processing power, becomes ever more compromised the faster above about 23 mph that we go – unless perhaps for Usain Bolt (28 mph for a few seconds). However, our rationalising mind struggles to notice this compromise when travelling at speed, having to assess the changing environment ahead and detect potential and real hazards needing action when sometimes it is too late. Here we will explore some of these human factors in a bit more detail.

Sight – we are ‘daytime’ or diurnal creatures.  Our eyes developed for this, giving us good trichromatic colour vision.  At night, our problems come from the great concentration of colour detection cells (cones) at and around the centre of our forward field of view (FFOV). That is ideal for daytime, but our low light and night-time, black and white detection cells (rods) are few in the central field of view and offer limited assistance in low light levels, except more toward our peripheral field of view.  We are grateful for vehicle lighting, but how effective really is our visual detection toward the edges and beyond of the lit area ahead of us on the road? 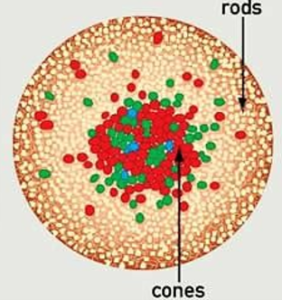 Contrast and conspicuity – two different but very much linked factors. Contrast is the visual grade between two tones of colour, whether monochrome, or in trichromatic colour.

To detect an object discrete from its background requires it to be sufficiently distinct in contrast gradient for the eye to detect it as being such (about 10% – Weber-Fechner Law). This applies in any lighting level. Contrast is an element to assist with detection, along with conspicuity, the latter being that quality of an object to make it detectable. This is also what makes the object ‘important enough’ for us to look for it and to detect it.

The golfer on the fairway sees their ball in the long grass, readily in view, because they are looking for it, whereas the non-golfer may not detect it, as the ball is unimportant and not of interest to them. This links with expectancy, or what we expect to see in a given situation – more on this later.

Furthermore, our brain is the ‘control unit’ in charge of the laziest machine known to humankind – us! Naturally, if it can find ways to shortcut a process, save energy and time, it will – unless we are aware of this and condition to override it.

Why do emerging right-turn drivers often fail to see vehicles, particularly motorcycles, approaching from their right, until it is too late, or worse, at impact?

In its quest to save time, the brain abbreviates the second observation, with the potential consequences of approaching traffic, originally far enough away to be detected but not cognitively acknowledged as a hazard, now suddenly “…appearing out of nowhere, officer!” 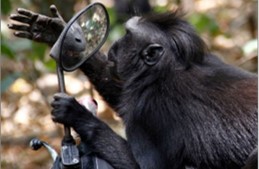 Reflection does not occur naturally in a useful form for us, so interpreting a back to front reflection of an object requires a cognitively conditioned process, whereby we correctly interpret that ‘left is right’ and ‘right is left’.

In the driven environment, we have a mirror that gives a rearward field of view, generally on a moving object – the side of our vehicle. Moreover, we are also generally looking for, or looking at, moving vehicles.

Designing the mirror glass to be convex, non‑symmetrical, and, possibly with a varying radius across the glass, leads to reflected objects being back to front and distorted, more so toward the edges of the glass.  Recognised research has found that judgement of speed and distance in convex rearview mirrors is problematic, even to the extent that such mirrors are not permitted on the offside of vehicles in the USA.

Mirror observations take time, even more so where a head-turn is required.  After the observation comes cognitive processing time, when although we might now be looking ahead, the brain is still processing and applying the viewed data.

Large goods vehicle drivers take this a stage further – mirrors at the front and nearside of their vehicles that can be reversed images, distorted, and upside down.  All of these processes should be considered in the context of driving within a collision event, especially where the driver’s perception-response time (PRT) is considered with time available. 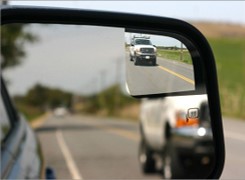 External rear-view mirror illustrating the distance disparity between the image of the white car in the main, planar lens, and the convex top right lens.

Perception Response Time – where to start? One of the most researched topics of a collision reconstruction is that time from detection of a hazard to commencement of our response – braking, steering, both, or neither, – to that hazard.

Potentially affected by many factors, such as fatigue and intoxication, but aside from those comes experience, expectancy, and other factors such as distraction, which might include mirror checks.

Expectancy – from detecting an object that is sufficiently contrasting against its background, it still does not follow that the time to action remains constant.  Once an image is processed in the mid-brain and identified, our rationalising functions can question why the identified object is ahead of us. This can also take time. So, it is realistic that the pedestrian standing in the middle of an unlit motorway at night, being ‘out of context’, would result in a slightly longer time for a driver to react than, for example, a pedestrian in a residential street during daytime (in context).

All of these factors have been peer-reviewed researched, and are recognised constructs and influences upon PRT and driver performance.  To not consider in an informed manner these factors in the context of an incident is to fail to serve expert service to the Courts and to the road users involved.

The above is a far from an exhaustive list of factors for the collision investigator to consider, but it offers a small insight into the field of human factors and its influence on a collision reconstruction.