Expert Witness Home > A history of impact biomechanics, Part 2 – from TRL beginnings to the 1990s

A history of impact biomechanics, Part 2 – from TRL beginnings to the 1990s 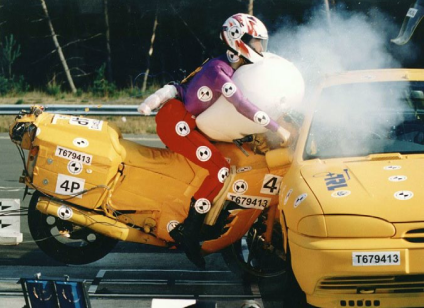 TRL has been at the forefront of research into impact biomechanics and vehicle safety since its infancy.

TRL’s history starts in 1933 when we were formally established by the UK Government as the Road Research Laboratory (RRL) under the Department of Scientific and Industrial Research at Harmondsworth near London. Early research was mainly focused on road materials and design, with some work on safety.

In 1946 the Road Safety Division was formed and from 1949, data on personal injury accidents were compiled on standard forms by police. Studies included trends in casualties, when accid 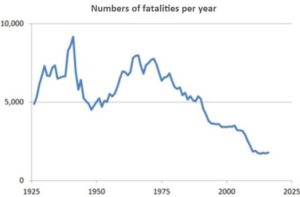 ents occurred, locations of accidents, effects of traffic volumes and the derivation of accident rates for various types of road and vehicle. These studies showed that road fatalities peaked in 1941 during blackout.

By the early 1950s, researchers at TRL used analyses of data from road accident investigations and hospital records to highlight incidence of head and chest injuries to car occupants.

From 1956 on-the-spot studies of accidents were conducted with the cooperation of police forces. Records were reviewed including photographs, road conditions and manoeuvres, vehicle damage; and where possible, injuries. Some of the initial findings included frequent failure of vehicle seat frames, the dangers of rigid rather than yielding steering columns, and the importance of seat belts.

TRL was also at the forefront of research into motorcycle accidents. In the 1950s, nearly one‑fifth of all road casualties were motorcyclists. In 1953 a demonstration for the Metropolitan Police simulated a dummy head with a 2-litre glass flask falling on a concrete kerb stone. Padded with a policeman’s cap it broke when dropped from less than 3 feet, but with a safety helmet at 10 feet. This resulted in adoption of helmets by Metropolitan Police and many civilians. BS2001:1956 standard “Protective helmets for motor-cyclists” included performance tests devised by RRL.

In 1972, TRL began experimenting with an anti-lock braking system fitted to the front wheel of a motorcycle. This work later spread into broader research, relating to head and leg protection as well as motorcyclist conspicuity. Rider head and chest injuries were found to be most likely in head-on crashes with another vehicle. In 1994 Lotus Engineering designed and built a motorcycle airbag to TRL specifications to absorb 80% of a rider’s kinetic energy. 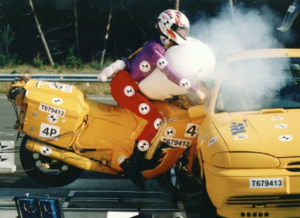 In 1961 TRL conducted its first full-scale frontal impact test under controlled conditions. A car was impacted into a 114 tonne block at 60-70 km/hr. The car and dummies were instrumented, and high-speed cameras recorded deformation of the vehicle and movement of the dummies.

Conclusions from these studies led to awareness of the importance of occupant safety in vehicle design and showed that wearing seat belts could reduce serious injury by 80%, as well as highlighting the need to coordinate the seat and seat belt, the size and shape of the space in front of the passengers, and the crushable front of the vehicle. 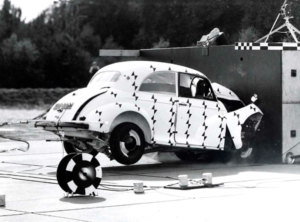 By 1975 investigations were underway into what proportion of the front of a vehicle was involved in collisions, angle of impact and object struck.  Offset impacts were found to be more representative of occupant injury in frontal accidents than was full-frontal impact. TRL was part of a European working group that developed offset impact test protocols which specified that 40% of car overlapping barrier face into deformable barrier. These produced results very close to those in real-world car-to-car collisions. The testing came into force in 1998. 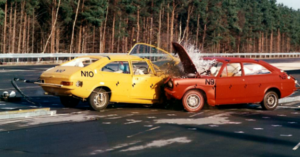 Studies into pedestrian safety in 1970 showed that protection of pedestrians is possible. In 1985, the Pedestrian Safety Car (PSC) was designed with revised surface stiffness and increased crush depth. This research resulted in the EU Directive 2003/102 EC, and an estimated savings up to 18% fatalities & 20% serious injury to pedestrians. 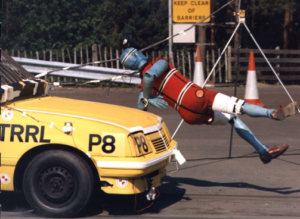 In 1970 TRL was at the forefront of child safety in transport. It was in this year that TRL developed the first new-born baby test dummy. This research led to the development of the 6-week-old P0 dummy which was eventually used for the evaluation of rear facing infant carriers in the UNICEF Regulation 44. TRL led international collaboration to develop the ISOFIX child restraint, a universal system using rigid attachments that click into place, and in November 1994 TRL won the AA National Motoring Award for this effort. In 2006 the New Programme for Assessment of Child Seats (NPACS) was established to assess individual child seats for ‘Universal’ use. 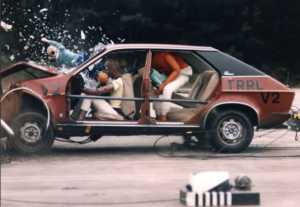